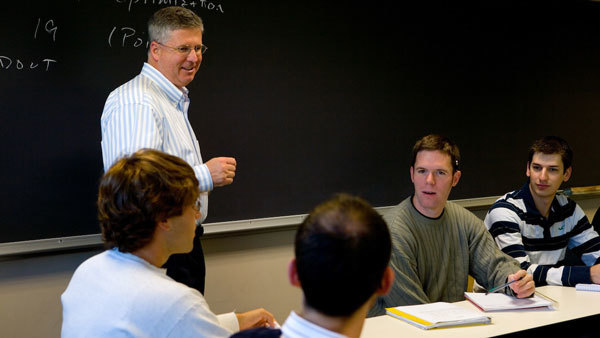 Bill Evans, the Keough-Hesburgh Professor and Chair of Economics here at the University of Notre Dame, presents on his research project, "How the Reformulation of OxyContin Ignited the Heroin Epidemic," to an interdisciplinary group of scholars, artists, and scientists comprised of fellows, guest faculty and students. Professor Evans' research covers a broad range of areas including health economics and the economics of education.

In 2007, Bill Evans joined the Department of Economics at Notre Dame as the university’s first Keough-Hesburgh Professor. This professorship was designed to attract leading scholars to Notre Dame to contribute to both the academic life as well as the Catholic mission of the university. He received his undergraduate degree from Wake Forest University and his PhD in economics from Duke University.

His work has appeared in the top journals in the economics profession and his research is routinely covered by the popular press. In 2012, Bill and his colleague Jim Sullivan started the Wilson Sheehan Lab for Economic Opportunities, a research center devoted to finding evidenced-based solutions to poverty. He has been the primary adviser on over 50 dissertations and his former students are employed as faculty members at leading academic institutions throughout the world.