Join the Notre Dame Institute for Advanced Study on Thursday, April 6, 2017 at 4:00 p.m. in 155 DeBartolo Hall for "Reconnecting Science to Its Ancient Theological Sources," a public lecture by Professor Tom McLeish, FRS, physicist from Durham University.

Taking as a principal source a scientist’s reading of the ancient text of Job, in this lecture physicist Tom McLeish will suggest that science should be seen as a deeply human and ancient activity, embedded in some of the oldest stories told about human desire to understand the natural world. Drawing on stories from the modern science of chaos and uncertainty alongside medieval, patristic, classical, and biblical sources, this lecture will challenge much of the current “science and religion” debate as operating from the wrong assumptions and in the wrong space. Professor McLeish will offer his critique of the cultural separation of sciences and humanities, suggesting an approach to science, or, in its more ancient form, natural philosophy (the love of wisdom of natural things), that draws on theological and cultural roots. Science finds its place within an old story of participative reconciliation with a nature of which we start ignorant and fearful but learn to perceive and work with in wisdom. As Professor McLeish points out, surprisingly, science becomes a deeply religious activity. Following the theme of pain in human confrontation with nature, he will develop a theology of science, recognizing that both scientific and theological worldviews must be of each other, not holding separate domains. 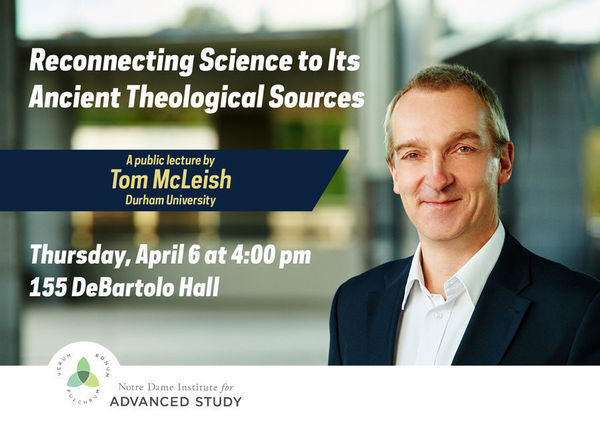 Tom McLeish, FRS is Professor of Physics at Durham University. His research has contributed to the new field of “soft matter physics,” a field in which he works with chemists, engineers and biologists to study relationships between molecular structure and emergent material properties. This work has also included biologists, with whom Professor McLeish developed statistical mechanical theories for the self-assembly of biomolecular fibrils and thermal mechanisms for signalling in protein binding (“allosteric” signalling).

His current research includes physics-inspired models of evolution and he is currently the principal investigator of the United Kingdom “Physics of Life” network, funded by the Engineering and Physical Sciences Research Council (EPSRC). He has also served as the leader for large academic-industrial collaborations, which Professor McLeish argues enrich fundamental science as well as generate commercial value. His other academic interests include the framing of science, society and science policy, including his recent collaborative study of narratives about genetically modified organisms (GMOs) in BRIC nations (Brazil, Russia, India, and China); and science history, especially a large current interdisciplinary project re-examining scientific treatises from the 13th century.

Professor McLeish is the author of Faith and Wisdom in Science (2014) and co-author of Let There Be Science (with David Hutchings, 2017), works that articulate a theological narrative for the debates in science and theology and which were inspired by Professor McLeish’s work in science policy and public science. From 2008 to 2014 he served as Pro-Vice-Chancellor for Research at Durham University and currently serves as Chair of the Royal Society’s Education Committee, which elected him a Fellow in 2011. He has been a Reader in the Anglican Church since 1993 and is a trustee of the John Templeton Foundation.