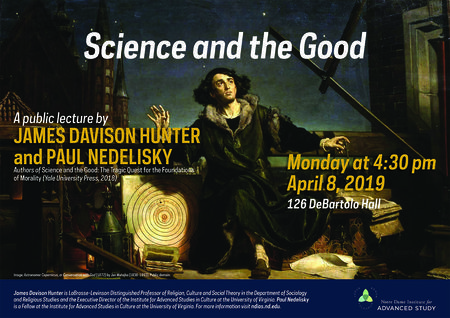 Join the Notre Dame Institute for Advanced Study for a public lecture by James Davison Hunter and Paul Nedelisky entitled "Science and the Good."

Hunter and Nedelisky are the authors of the recent book Science and the Good, the Tragic Quest for the Foundations of Morality (Yale University Press, 2018). In this lecture, they will confront the role of science in modern public discourse by examining the daunting and long-studied questions of whether there is a scientific basis for morality and whether efforts to create such a basis are doomed to fail. The “new moral science” advocated by E.O. Wilson, Patricia Churchland, and Joshua Greene contends that because right and wrong are not amenable to scientific study, they don’t actually exist. Hunter and Nedelisky argue that the resulting moral nihilism turns the science of morality into a social engineering project and that if there is nothing moral for science to discover, the science of morality becomes, at best, a program to achieve arbitrary societal goals.