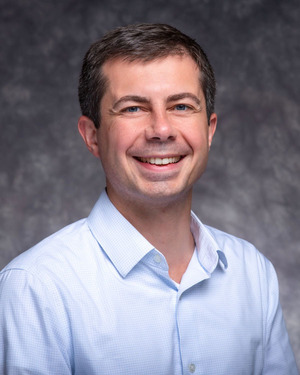 Pete Buttigieg was a Faculty Fellow at the NDIAS in Fall 2020 before stepping down in the spring to serve as the United States Secretary of Transportation.

Buttigieg pursued two research projects at the NDIAS, one that explored how to restore trust in political institutions and another that considered the forces distinctively shaping the 2020s. He also taught an interdisciplinary undergraduate course on the importance of trust as understood through different fields. The seminar drew on literature, politics, economics, and philosophy.

Pete Buttigieg served as the mayor of South Bend for two terms, from 2012-2020. A Harvard graduate and Rhodes Scholar, Buttigieg mounted a 2020 Democratic presidential campaign that captured national attention and won the Iowa caucus. Prior to the campaign, he served in the U.S. Navy Reserve and was deployed to Afghanistan.