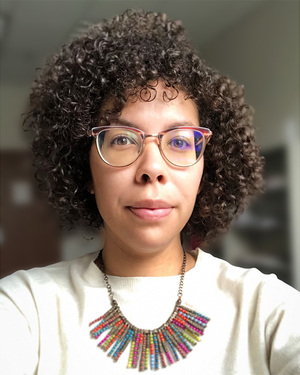 Emmalon Davis is an Assistant Professor of Philosophy at University of Michigan, Ann Arbor. She specializes in ethics, social and political philosophy, and epistemology. Her research project, “Paradoxes of Resistance: Maria Stewart's Public Political Philosophy,” explores the political thought of black feminist abolitionist, Maria Stewart. Specifically, Davis examines the tensions that arise in Stewart’s work at the intersections of her political theorizing, personal resistance, and her public mobilization of heterogeneous audiences. Davis interrogates the paradoxes engendered by these activities and reckons with Stewart’s own efforts to identify and resolve them in the public sphere.

Much of Davis’s published work explores the social processes through which knowledge is collectively developed and disseminated within and across communities. In particular, she looks at how race and gender oppression exert a distorting influence over these processes. With a special focus on the underrepresentation of women and people of color in higher education, her research aims to identify and ameliorate the epistemic challenges facing diverse practitioners in academic settings. Davis’s work has appeared in academic journals such as Hypatia and Ethics, and she is currently working on a Cambridge Element in Epistemology on the topic of epistemic injustice.

Davis was an LSA Collegiate Fellow at University of Michigan from 2019-2021. Before coming to Michigan, she was an assistant professor at The New School for Social Research. She received her Ph.D. from Indiana University, Bloomington in 2017, where she was the recipient of the President’s Diversity Dissertation Fellowship.