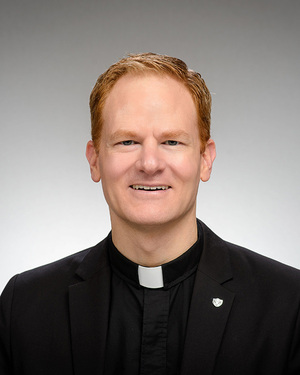 Gregory Haake, C.S.C., is an Assistant Professor of French and Francophone Studies at the University of Notre Dame. As a specialist of sixteenth-century France, he focuses on the intersection of politics, religion, and literature, with particular emphasis on how the latter intervenes in the political and religious spheres to accomplish ideological goals.

Fr. Haake is the author of The Politics of Print During the French Wars of Religion: Literature and History in the Age of “Nothing Said Too Soon” (Brill 2021), in which he examines how, in late sixteenth-century France, authors and publishers used the new medium of the printed text to control the terms of public discourse and determine history, or at least their narrative of it. He has also written several articles that have appeared in The Sixteenth Century Journal, Renaissance and Reformation, and Renaissance Studies and that have treated topics ranging from scripture to gender in both lyric poetry and short prose texts.

Fr. Haake is a priest of the Congregation of Holy Cross and before serving on the faculty at Notre Dame, served in parishes in South Bend, Indiana, and in Menlo Park, California. During two years of study in France, with Middlebury College and with the Ecole Normale Supérieure, he also assisted at Saint-Michel de Picpus, a Holy Cross school in Paris.