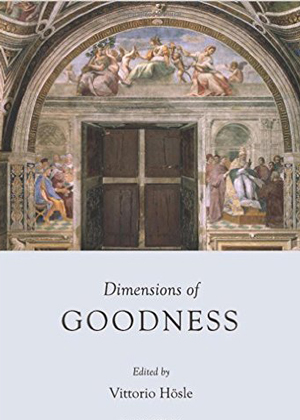 Dimensions of Goodness is based on the second conference of the Notre Dame Institute for Advanced Study, whose aim is to bridge the normative and descriptive dimensions of knowledge by bringing in as many disciplines as possible to address fundamental philosophical issues. While the first conference dealt with the elusive topic of beauty, the second addressed crucial issues of ethics. In the first section of this volume, the German philosophers Franz von Kutschera and Markus Gabriel discuss the nature of values and the reasons why we believe that normativity has a place in the world. In the second section, the British historian Jonathan Israel, the American theologian Jennifer Herdt, and the editor of the volume analyse epochal changes in our moral beliefs, due to Enlightenment, Christianity, and the general evolution of moral ideas, which is presented in a way that markedly differs from Alasdair MacIntyre’s famous account. The third section explores both the light that the exact sciences shed on the process of decision making (in the contributions by the Italian neuroscientist Camillo Padoa-Schioppa and the Canadian psychologist Clive Seligman) as well as the ethical challenges that modern science has brought forward in areas such as the responsibility of scientists, bioethics and medical ethics in chapters by the Swiss chemist and Nobel laureate Richard Ernst, the American bioethicist and historian of biology Jane Maienschein, and the American philosopher and legal scholar Anita Allen. The fourth section focuses on specific challenges of our time – the British philosopher Robin Attfield explores the principles of environmental ethics, the Swiss business ethicist Georges Enderle investigates goodness in economy, the Mexican elder statesman (former Secretary of Economy and of Foreign Affairs) Luis Ernesto Derbez Bautista looks at the challenges of development, and the American legal scholars Steven D. Smith and Mary Ellen O’Connell examine the place of religion in the American constitution and the power of international law in limiting violence respectively. Finally, the last section consists of a chapter by the well-known Chinese intellectual Wang Hui on Lu Xun’s struggle to find a middle way between respect of one’s own tradition and the demands of globalization.

There is probably no other volume in which so many different disciplines come together to try to find a convergence of perspectives on basic moral issues. The book will be invaluable to those who believe that goodness is the focal point of most academic disciplines and that academia can find a stronger point of unity in a common reflection on what goodness in various areas means.

Dimensions of Goodness is available from Cambridge Scholars Publishing. To purchase the book or read more, visit: http://www.cambridgescholars.com/dimensions-of-goodness-16.