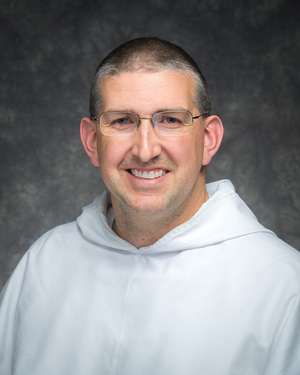 Fr. Raphael Mary Salzillo is a doctoral candidate in Philosophy at the University of Notre Dame. He specializes in medieval philosophy and metaphysics, with a particular interest in the philosophy of Thomas Aquinas. His work seeks to interpret Aquinas in a way that is both faithful to the texts and makes his thought intelligible to a contemporary philosophical audience. His current research focuses on Aquinas’s hylomorphic account of the human being and how this account of human ontology is relevant to our conception of the human good.

Fr. Salzillo did his undergraduate work in applied physics at the California Institute of Technology, after which he received an M.S. in electrical engineering from the University of California-San Diego. After becoming a friar of the Order of Preachers in 2001, he received an M.A. in Philosophy and a Master of Divinity from the Dominican School of Philosophy and Theology in Berkeley, California. He was ordained a priest of the Catholic Church in 2009 and worked as a chaplain at the University of Washington in Seattle before beginning his graduate studies at Notre Dame.