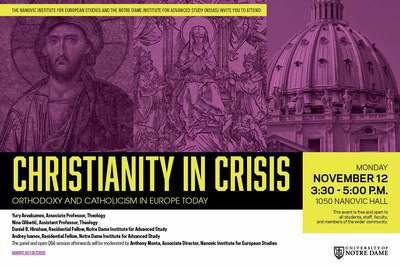 Wherever we look around the world today, Christianity appears to be in some sort of crisis.

Recently in the East, a decision by Bartholomew I (Ecumenical Patriarch of Constantinople) to grant recognition to a new national Ukrainian Orthodox Church has touched off what has been described as “a major schism” in global Orthodoxy. According to the President of Ukraine, Bartholomew’s action represented the “victory of good over evil.” The Holy Synod of the Russian Orthodox Church, however, responded to the decision by severing all ties with the Church led by Constantinople, a decision affecting some 250 million souls. What approach should we in the West take to navigating the ecclesiastical complexities of Eastern Orthodoxy, and in what terms can we best understand these recent events? Is the Roman Catholic Church immune to such divisions?

The panel and open Q&A afterwards will be moderated by Anthony Monta, Associate Director of the Nanovic Institute.

This event is open to all students, staff, faculty, and members of the wider community.